A lot has happened since Vanguard published its global economic and market outlook for 2019 at the end of last year. 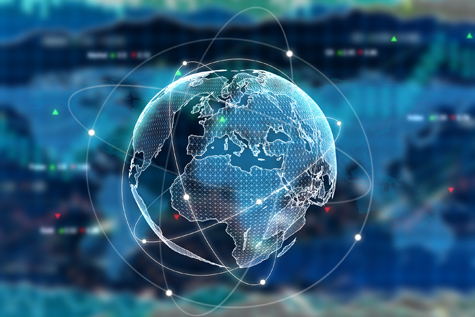 Decelerating global growth, increasing U.S.-China trade tensions, and disagreement in the United Kingdom on how best to exit the European Union frame an environment in which major central banks have signaled a readiness to loosen monetary policy to support growth.

“Despite these events, our forecasts have not meaningfully changed,” said Jonathan Lemco, Ph.D., principal and senior investment strategist in Vanguard Investment Strategy Group. “We expected a global deceleration to take place, and we expect economic growth to continue to slow for the rest of 2019.”

Even in this uncertain environment, fixed income markets have remained strong and equity markets have approached record highs, factors Mr. Lemco attributed to a shift toward accommodative policy stances by major central banks. For the first half of 2019, the FTSE All-World Index returned 16.25% in U.S. dollars, and the Bloomberg Barclays Global Aggregate Float-Adjusted Composite Index returned 6.22%.

At some point, Mr. Lemco said, markets may need to consider the underlying strength of economies in the context of further stimulus. “There’s a limit to markets interpreting bad news as good news because it may result in interest rate cuts,” he said. Comments from the U.S. Federal Reserve after its July 30-31 policy-setting meeting may shed some light.

China’s slowdown is in the spotlight

China has been at the forefront of global economic developments this year, a trend Vanguard expects to continue.

Vanguard expects China’s economy to grow at a below-trend pace of around 6.2% in 2019, its lowest rate in nearly 30 years, with risks tilted toward the downside. Despite China’s efforts to stabilise near-term growth, softening market sentiment and escalating trade tensions with the United States suggest that more aggressive stimulus measures might be needed to bolster private enterprise.

But with any stimulus, China would need to strike a balance between near-term growth and medium-term financial stability, said Vanguard economist Adam Schickling. “We expect China’s economy to continue slowing in 2020, growing between 5.8% and 6%,” he said.

Fiscal stimulus measures have helped stabilise consumer spending, while the property and construction sectors have thus far been resilient. However, China’s industrial sector faces challenges as automakers transition to new emissions standards and the risk of Producer Price Index (PPI) deflation re-emerges. (PPI deflation means producers are lowering prices, causing industrial profits to fall.) A truce in trade tensions would help boost near-term economic momentum, but, as we discussed in our 2019 outlook, structural issues affecting China’s economy will be critical for the country’s long-term growth trajectory.

Meanwhile, the Chinese yuan depreciated about 3% against the U.S. dollar in the second quarter, but easier monetary policy by central banks in Europe and the United States has removed further significant downward pressure. “We don’t expect the yuan to fluctuate substantially in the near term, as currency valuations will remain a key component of U.S.-China negotiations,” Mr. Schickling said. Further, he said, previously enacted capital control measures “reduce the probability of a scenario in which a depreciating currency leads to higher capital outflows, which lead to further depreciation.”

Winners and losers of “deglobalisation”

Trade tensions caused in part by deglobalisation (the process of diminishing integration between countries and regions) are a big reason for Vanguard’s below-consensus forecast for China’s economy. “We were particularly bearish because Chinese companies had been frontloading their exports in 2018 in anticipation of escalating trade tensions,” Vanguard economist Jonathan Petersen said. “We believed the benefits of this strategy would dissipate in 2019.”

The current 25% U.S. tariffs on $250 billion of Chinese imports is likely to shave 35 points off China’s GDP in 2019, Mr. Petersen said. A further 25% tariff imposition on all U.S. imports from China—though unlikely—could nearly double the impact, to 60 basis points off Chinese growth, he said. (A basis point equals one-hundredth of a percentage point.)

The U.S.-China trade dispute will likely end with only marginal changes

But any increase in tariffs will have negative repercussions.

The most likely outcome of the U.S.-China trade dispute is a modest tariff escalation (65% chance). But an escalation in tensions (25% chance) is possible, and this could have a more dramatic impact on global growth. The least likely scenario is a bilateral deal (10% chance) in which China agrees to buy more U.S. goods and the U.S. removes tariffs with a preliminary agreement on structural issues such as intellectual property rights.

Naturally, winners and losers will emerge from increased trade tensions and a broader slowdown in China. The United States, Mexico, Africa, and Southeast Asia will generally be less affected than Europe and most emerging markets.

Vanguard expects annual growth in emerging markets overall to decelerate from its original forecast of 4.6% to 4.4% as slower growth globally, particularly in China, weighs on emerging-market industrial production.

Our view on growth in North America

The United States is likely to hold up better simply because it is less dependent on global trade than the rest of the world. Nonetheless, Vanguard in June cut its outlook for U.S. economic growth to slow to an annualised pace of 1.7% by year-end, with 2019 full-year growth around our 2% expectation.

Mexico has captured 50% of the market share of Chinese goods that have been affected by U.S. tariffs, such as LCD monitors and other electronics. A risk for both the United States and Mexico is the fate of the United States-Mexico-Canada Agreement, a trade pact that only Mexico has ratified so far. Vanguard expects all parties to ratify the deal before the end of 2020.

U.K. resilience wanes as all of Europe slows with global trade

Vanguard expects a reversal in fortunes for the United Kingdom after it showed surprising resilience earlier in the year. Investment remains subdued because of uncertainty over Brexit. “We had previously expected a Brexit deal in June and a post-Brexit bounce during the second half of 2019,” Mr. Petersen said. “But given the extension of an exit agreement to October 31, we have pushed our growth forecast for the second half from 0.4% to 0.3%.”

Mr. Petersen said the situation in China is a big reason why Vanguard downgraded its forecasted 2019 growth rate for Europe from 1.5% to 1.0%. “Our call at the beginning of the year had been slightly above trend compared with the International Monetary Fund consensus of 1.3%,” he said. “China is the EU’s biggest source of imports and its second-biggest export market. Our views have shifted not only because of the key role China plays in the European economy, but also because of the elevated risk of Brexit and of fiscal tensions related to Italy.”

In Japan, domestic demand is likely to offset a global export slowdown, as severe labor shortages and higher demand associated with next year’s Olympics drive infrastructure spending and other investments. For these reasons, Vanguard expects Japan’s economy to grow 0.6% in 2019 and 0.5% in 2020.

In Australia, real GDP is likely to grow between 2% and 3% in 2019, in line with Vanguard’s expectations at the start of the year, with risks to the downside if a potentially stronger-than-forecast slowdown in either the United States or China occurs.

What to expect with the U.S. Fed

Modest deterioration in economic fundamentals amid an escalation in trade tensions has led to a more dovish monetary policy outlook. Vanguard had anticipated one Fed rate hike at the start of the year but in April revised the assessment to no movement in target rates. “We have since changed our Fed call from no change in 2019 to two rate cuts,” Mr. Lemco said. “We have also shifted our European Central Bank and Bank of England view from one rate hike apiece over the next 12 months. We now expect the ECB to lower rates by 20 basis points and restart quantitative easing before the end of the year, and no policy change for the Bank of England with risk skewed toward further easing.”

Our outlook for investment returns

With slowing growth and easing monetary policy across much of the globe, risk-adjusted returns over the next several years are expected to be modest at best. “In the short term, expect bouts of higher volatility in the stock and bond markets,” Mr. Lemco said.

Over the next decade, Vanguard’s projections for market returns have not changed, with global equity returns, from a U.S. investor’s perspective, in the 5%–7% range. For fixed income, Vanguard forecasts returns over the next ten years of 2%–4%, with deterioration of credit markets a key downside risk. “Throughout the world, we are seeing increased borrowing and credit market downgrades,” Mr. Lemco said. “At some point, continued credit rating cuts could trigger a market downturn as investors dump debt from their portfolios.”

Economic growth is slowing worldwide, and investment returns are likely to be muted

Vanguard expects economic growth to continue to slow and investment returns to be muted. 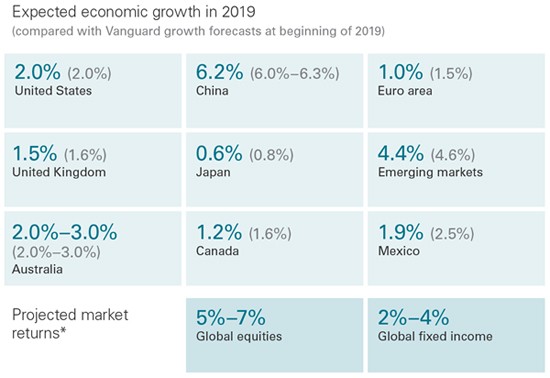 We counsel investors to focus on things they can control, including setting clear investment goals, ensuring that portfolios are well-diversified across asset classes and regions, choosing well-designed, low-cost investments, and taking a long-term view. This guidance is particularly important when global economies seem poised for change. Recent market gains present an opportunity for investors to ensure that their portfolio allocations reflect their goals.

“In the end, short-term developments are less important to investors’ success than the big-picture trends that will shape markets in the years ahead,” Mr. Lemco said.